Your Club, Your Community and the Liquor Act

Many readers would have attended the Clubs & Community Awards evening, which was held in Sydney on Friday 8 May. The evening not only showcases the significant and vital contributions clubs make in local communities, it also enables the club industry to inform the broader population about the direct and positive outcomes resulting from those contributions.

The primary value underpinning the work of most clubs is service to the local community. In fact, the ClubsNSW website identifies the purpose of registered clubs “…being to deliver a wide range of benefits to their members and the wider community”.

Because clubs play such an important part in their communities it is not surprising that there is a significant amount of law – particularly legislation made by Parliament – that has regard to clubs and the community. This is particularly evident in the Liquor Act 2007 (NSW).

One of the three objects of the Liquor Act is “to regulate and control the sale, supply and consumption of liquor in a way that is consistent with the expectations, needs and aspirations of the community”.

The word “community” appears extensively throughout the Liquor Act.

For example Section 48 is headed “Community Impact”. It provides the framework for the Independent Liquor and Gaming Authority to assess and then consider the impact that certain liquor licences, authorisations or approvals will have on the local community by hearing the views of the community and the results of discussions between the entity applying for the new license and the local community.

“(1)      The object of this section is to facilitate the consideration by the Authority of the impact that the granting of certain licences, authorisations or approvals will have on the local community, in particular by providing a process in which the Authority is made aware of:

These provisions allow for the Secretary of the Department of Trade and Investment Regional Infrastructure and Services (the Department) to approve a liquor accord for a specific community event. Under section 136C(4) of the Liquor Act;

(a) in the area in which the accord is to apply there is, or there is a potential for, a significant risk of harm to members of the public associated with the misuse and abuse of liquor (including harm arising from violence or other anti-social behaviour), and

(b) the measures to be provided for by the accord are necessary:

(i) to prevent harm to members of the public associated with the misuse and abuse of liquor in the area in which the accord is to apply (including harm arising from violence or other anti-social behaviour), or

(ii) to protect and support the good order or amenity of that area in connection with issues arising from the presence of, or proposed increase in the number of, licensed premises in that area.”

Section 136D provides that a community event liquor accord may include such measures as the Department Secretary considers necessary to minimise or prevent alcohol-related violence or anti-social behaviour or to protect and support the good order or amenity of any area due to the proposed increase in the number of licensed premises in the area concerned.

The notion of the law and the community is not new. The great theologian St Thomas Aquinas (1225–1274) wrote: “Law, an ordinance of reason for the common good, made by him who has care of the community.”

Much legislation has been developed with the intent of the common good and the Liquor Act is no exception. Clubs play an important role in the prevention of harm associated with the use of liquor in their communities

In conclusion I want to congratulate all those clubs that received recognition for the work they undertake and the roles they play in their respective communities.

For more information about the Liquor Act 2007 contact Bruce Gotterson on b.gotterson@pigott.com.au

Click on the image below to see the article as it appeared in Club Life June 2015. 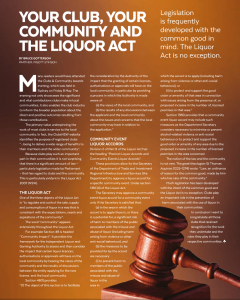