This article appeared in the December 2015 issue of Club Life.

With both the Prime Minister and the opposition leader having expressed views that Australia should be a republic, the possibility of change to Australia’s Constitution has recently been in the spotlight. The Australian Constitution is essentially a set of rules for governing our country; it sets out the basis for relations between the Commonwealth and the States.

Arguably, equally important is a club’s constitution. (Admittedly, that may only be for the Pigott Stinson Club’s team.) Similar to the Australian Constitution, a club’s constitution is a set of rules for governing a club; it sets out the basis for relations between a club, its board and its members.

Clubs often call us for a range of issues, from questions relating to board elections and disputes with members to amalgamations or selling or developing club land.

In almost every instance the first thing that we will need to check is the club’s constitution. In many instances matters can be made more difficult from out-of-date and even archaic club constitutions.

Boards and management of registered clubs are required to regularly review their club’s constitution to ensure that it is up-to-date with current legal requirements and also reflects good corporate practice.

The laws that relate to, and impact upon, registered clubs have changed significantly in the last five to ten years. Examples of this include:

Each legislative change introduced substantial reforms to the administration of registered clubs in NSW.

Firstly, it is to identify whether the constitution is inconsistent with any provision of the Registered Clubs Act or any other legislation.  Disciplinary action can be taken against a club under section 57F of the Registered Clubs Act if it can be established that the club has habitually broken a deemed rule under section 30(1) or a rule of the club. So if a club has a rule in its constitution, for example one that allows proxy voting at general meetings, which is inconsistent with one of the rules in section 30(1) that prohibits voting by proxy, then the club may face disciplinary action if the rule has been broken many times over a number of years.

Thirdly, it is to identify whether the document needs to be formatted so that it is set out in a more coherent and logical manner. Members should be able to read, and understand, the club’s constitution. After all it is the contract between the club and its members.

Fourthly, it is to identify where change is required to include all relevant legislative provisions so that the constitution properly reflects the current state of the law and best practice and can be read without constant reference to referenced sections in legislation

So regardless of whether Australia becomes a republic, the one thing that is certain is that clubs will be governed by their constitution. This can be a simple, up-to-date and relatively easy to understand document or an archaic document that requires solicitors to interpret in the event of even the most minor disputes.

Pigott Stinson regularly reviews constitutions on behalf of registered clubs and can advise on recommended amendments.

Click on the image below to see the article as it appeared in Club Life December 2015. 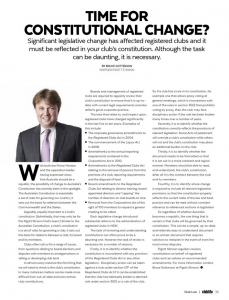