Three Strikes? Don’t Get Caught Out

Throughout December and January, the Office of Liquor, Gaming and Racing (OLGR) conducted audits and compliance programs throughout New South Wales.

Without a doubt, all clubs must strive to comply with all of their legal obligations, particularly those imposed by the Liquor Act and, as you would be aware, there are very serious penalties for a number of offences under the Liquor Act, including the risk of fines of up to $11,000.00 and/or 12 months imprisonment. However, one thing that should be in the forefront of club CEOs minds are the consequences of paying a penalty notice, failing to take action until a penalty notice enforcement order is issued or pleading guilty to a prescribed offence under the Liquor Act.

Prescribed offences under the Liquor Act include:

One of the most important things to be aware of is that, while second and third strikes are discretionary, a first strike is automatically incurred on conviction for a single offence and is active for three years from the date of the offence.

Under the Liquor Act, a club “commits” a prescribed offence if:

We are aware of some clubs that have reportedly paid a penalty notice as a “commercial decision” because the seemingly small amount of the fine did not appear to be worth the possible legal costs of defending the charge.

However, if a club has a valid defence, this can indeed be a costly mistake.

Consequences of a first strike

The consequences of a first strike for a club are serious and require the club to pay the “compliance history risk loading” and the “patron capacity risk loading” which form part of a club’s risk-based licensing fee. For a club with patron capacity of more than 300 persons, a first strike will mean that a club’s risk-based licensing fee will increase by $11,000.00 per annum for the next three years (being a total of up to $33,000).

Furthermore, additional licence conditions can be placed on a club’s licence after a first strike is imposed. A breach of these conditions may lead to a second strike and additional penalties and restrictions. Accordingly, paying a penalty notice when the club has a valid defence can be a very costly mistake indeed.

Even if a club has paid a penalty notice, it may still have an option to have the offence dealt with by a court, in which case urgent advice should be sought.

A second and ultimately a third strike can have very serious consequences for not only the club but for the secretary manager who can lose his/her livelihood and members of the governing body who can be disqualified from being on the board of a club.

Accordingly, in our view, if a club has the ability to avoid receiving a first strike, it needs to give urgent and serious consideration to all available defences.

Of course, the best defence for any club is to ensure that the club complies with the Liquor Act at all times and avoids the need to defend a charge. If your club has recently received a penalty notice, or for more information, contact Pigott Stinson lawyers.

Click on the image below to see the article as it appeared in Club Life February 2016. 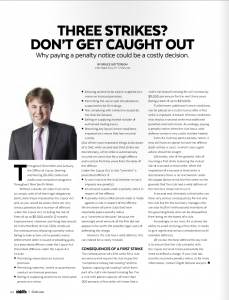