I am thinking of a very significant building in Sydney. If you currently live or work in Sydney or have lived or worked in Sydney you have probably walked past this building many times. I am thinking of the ANZAC Memorial Building situated in the southern end of Hyde Park. With the 100 year anniversary of the Gallipoli landing nearly upon us, I wanted to reflect on this wonderful memorial which has been part of the Sydney City landscape for many years.

“The ANZAC Memorial was created by the people of New South Wales as a place to remember the impact of the Great War (1914–1918). Although the Memorial did not open until 1934 the need for the Memorial was recognised as soon as the casualty figures from the 1915 Gallipoli campaign became public knowledge. Planning for a Memorial of some kind began with the establishment of a fund on the first anniversary of the landing at Gallipoli in 1916.”

“The ANZAC Memorial is at once both a work of art and a remarkable piece of architecture. The artist was George Rayner Hoff, an English sculptor who had migrated to Sydney in the 1920s. Rayner Hoff had served in the Royal Engineers as a map maker in France during the Great War and in Germany with the the [sic] army of occupation. His collaboration with the Australian architect Charles Bruce Dellit on the ANZAC Memorial is seamless, it is impossible to identify where the work of the artist ends and that of the architect begins.”

Being a lawyer I wanted to find out if there was a specific Act of Parliament that provides for the structure to maintain, protect and promote the Memorial. Well there is an Act.

The Anzac Memorial (Building) Act 1923 is an Act of the NSW Parliament.

It provides for Trustees who under section 5 have the control and management of the Memorial.

Section 8A lists powers of the Trustees:

(ii)       authorise the manufacture, printing, publishing, and sale of, replicas, photographs, booklets, pamphlets and other like matter relating to the memorial building,

(ii)       proceeds of sales by the trustees of replicas, photographs, booklets, pamphlets and other like matter relating to the memorial building,

(iii)      fees for authorities granted by the trustees for the manufacture, printing, publishing and sale of such replicas, photographs, booklets, pamphlets, and other like matter, for the funds of the trustees,

(d)       may establish and maintain a war museum as part of the memorial building,

(e)       may promote the understanding of, and conduct community education about, Australia’s military history and heritage, and

(f)        have the functions conferred on them by the Returned and Services League of Australia (New South Wales Branch) Incorporation Act 1935 and any other Act.

(2)       Any moneys received by the trustees pursuant to subsection (1) (c) shall be available only for the purposes of carrying into effect the powers and duties of the trustees under this Act.”

The Returned and Services League of Australia (New South Wales Branch), which is described as the “League” under that Act upon which it was incorporated, is the guardian of the Memorial (see section 5 (1)).

Even though the legislation is not itself riverting reading it is crucially important as providing the legal framework for the ongoing viability of the Memorial and those chagred with its protection.

Anyone visiting Sydney should visit the Memorial and reflect upon the sacrifice of so many in order to protect our freedom and way of life.

Click on the image below to see the article as it appeared in Club Life April 2015. 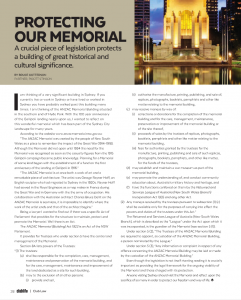