My wife works at the Club, why can’t she vote on my behalf at the AGM?

This article appeared in the May 2016 issue of Club Life.

Recently, an elderly gentleman wanted to vote at a general meeting of a Club but was not able to attend on the day. He asked firstly whether he could send a letter to the Club with his vote or, alternatively, whether his wife who worked a few days a week at the Club could vote on his behalf.

Unfortunately, the answer to the above is “no” for a number of reasons.

At common law (and going back to a case in 1883), a member with the power to attend and vote at a meeting could use those powers only in person unless the constitution provided otherwise. Of course, some things have changed since 1883 and the right for members of a company to appoint a “proxy” to attend and vote at a general meeting is now governed by statute and, in most companies, common practice.

However, as it was in 1883, section 30(1)(d) of Registered Clubs Act continues to prohibit proxy voting for registered clubs.

Interestingly, the NSW government has proposed to amend legislation governing strata buildings to limit the number of proxies that can be held by any one owner. Many strata schemes have had problems with individuals “proxy farming” where a person collects as many proxy forms as they can from uninterested owners and then votes in a way that serves their own interests.

It is not difficult to see the risk of proxy farming to the registered clubs industry, where one or two members could round up numerous proxies. While clubs are protected from this behaviour it also means that the elderly gentleman is unable to have someone vote on his behalf.

However, this is not the only issue with the gentleman’s proposal.

As the gentleman’s wife was an employee of the Club, under s 30 (1)(h) of the Registered Clubs Act she too is prohibited from voting, even on her own behalf.

In fact, section 30(1)(h) prevents an employee of a club from voting in the election of a board or a committee of another club or association if any member of that governing body would (because they hold that position) be entitled to appointment to the board of the registered club. So, for example, if being elected to the committee of a football club meant that person was then appointed as a director of a registered club, then the employee could not vote in the election of the football club.

Similar to the restrictions on proxy voting it is easy to see how the above rules protect members. I have been to many club AGMs that struggle to make quorum or have very few members vote at the AGM. Presumably, if employees were allowed to vote it is not difficult to foresee them voting for (and successfully electing) directors who promised to improve pay and conditions above all else.

Importantly, the above rules are “deemed rules” and apply regardless of what a club’s constitution might say. This is because of section 30(8) of the Registered Clubs Act, which provides:

“Any rule of a registered club (except a rule that is deemed by subsection (10) to be included in the rules of the club) that is inconsistent with any rule specified in subsection (1) or (2) is to the extent of the inconsistency of no force or effect.”

So if a club’s rules said that employees of the club were able to vote at general meetings or in the election of the board of directors then it would be inconsistent with the deemed rule in section 30(1)(h) and (to the extent of the inconsistency) that rule would be of no force or effect.

Because of this, I recommend that clubs include all of the deemed rules in sections 30(1) and (2) into the club’s constitution to avoid any confusion about what does and does not apply. While it may be unfortunate for the gentleman (and his wife) who were unable to vote, it is clear that the above regulations help ensure that the board is answerable to the members who take an active interest in the club.

Click on the image below to see the article as it appeared in Club Life May 2016. 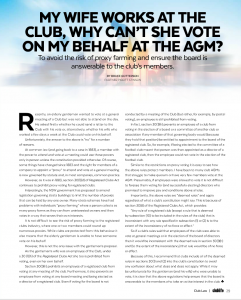