Joint developments: getting the best deal for your joint

This article appeared in the March 2015 issue of Club Life.

In December I wrote an article briefly discussing some basic matters that clubs should consider when developing club land. Last week when I was out at a club I saw that the article had been photocopied with highlighting throughout and given to the directors for a Board meeting. One question that came up is: “Should a club allow the developer to take out a mortgage over the land to be developed?”

There is no ‘one size fits all’ structure for a joint venture, but a common proposal put to clubs is one where the club is asked to put up part of its land and the developer proposes to pay for the cost of the works to develop and build on that land.

It is not uncommon for developers to request that a club consent to a mortgage over the land so that a bank can provide finance for the development. In some cases this may be unavailable. However, it must be carefully structured. Important things to remember are that the club’s land (unless sold to the developer) is, and usually will remain during the development, the property of the club and, unless carefully structured, the club, as manager, gives a personal covenant (similar to a guarantee) to repay the development borrowings.

The risk of allowing a mortgage over a proposed site is best illustrated by the following example. A number of years ago a council was approached by a developer to develop a council car park. The developer proposed to build a new multi-storey car park for the council, as consideration for acquiring the land.  The new multilevel car park would replace the previous on grade asphalt car park. The developer requested that the council give a mortgage over the car park land as security for a loan that was to be used by the developer to fund the construction of the car park.

The council agreed to the mortgage being placed over the car park and a financier lent money to the developer to commence the works. Unfortunately, the developer became insolvent and the financier, as mortgagee, exercised its rights under the mortgage and took possession of the car park with a view to exercising its mortgagee’s power of sale. Long story short, the council had to effectively purchase back its own car park from the financier.

This is not to say that a club should never allow a mortgage to be granted. But if it does become necessary then the club needs to be rewarded for providing the security for the loan and it needs to be carefully structured to minimise risk to the club.  For instance, in some multi stage developments it may be acceptable to the club if the developer injects its cash contribution (or equity) in the early stages and borrowings only commence as construction proceeds and the club’s land value increase. Advances can be linked to a quantity surveyor’s assessment of the fair cost of construction.

It is critical to the club’s negotiating position that it knows what it has to offer and maximises its contributions before negotiations commence.  That is one area where an experienced solicitor can advise the club early on how to prepare. Generally speaking, a club cannot get good advice too early.

Essentially, if the club is supplying the land and a mortgage on its own land to fund the development, the club needs to consider what value the developer is, in fact, bringing to the joint venture and ensure that the club is not only protected but stands to get a fair reward for its contribution and risk and that the interest on the developer’s portion of the loan is deducted from its share of the profit.

As I said, there is no ‘one size fits fall’ solution, but the best advice I can give to a club is to get good advice early and avoid the trap of negotiating when the Club is under financial pressure.

Click on the image below to see the article as it appeared in Club Life March 2015. 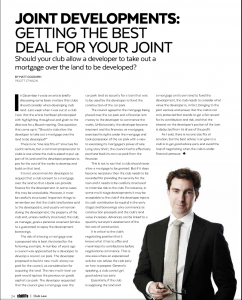