I want my Solicitor to come to the meeting!

This article appeared in the May 2015 issue of Club Life.

The answer is not found in an Act of Parliament. A club’s constitution may allow a person to be legally represented at a disciplinary hearing-if it does then a member has the right to require legal representation. This is however unusual and may indicate that your constitution has not been updated in a number of years. What happens here? Generally the answer is in the common law, that is judge made law.

The first question to answer is whether the rules of natural justice or procedural fairness (as it is more commonly referred to nowadays) apply. If they do, then the next question to ask is do the requirements of natural justice/procedural fairness require that a club allow a member the right to legal representation at a disciplinary charge hearing. This was the approach of Justice Needham in McNab v Auburn Soccer Sports Club Ltd (1975) 1NSWLR.

In that case the club had sent the member a notice of disciplinary charge and hearing in relation to his conduct at a club function. The member had his solicitor write to the club before the meeting to advise that he was acting for the member and that he had been instructed to attend and appear for the member at the hearing/meeting.

The club refused the request and when the member and his solicitor arrived for the hearing/meeting they were told that the solicitor was not allowed into the meeting. The member and the solicitor left and the issue was determined in their absence. The club board resolved that the member be suspended until such time as he attends before the board. The member challenged the decision. One of the grounds of challenge was that he was denied the right to be legally represented at the meeting. In determining firstly whether the rules of natural justice applied, Justice Needham said:

“It is my opinion that where a person, being a member of a social club, whether incorporated or not, is charged with some departure from the rules of that club and is faced with expulsion or other detriment, and where the rules of the club permit him to attend a meeting at which his expulsion is to be considered and to answer the charges against him, the rules of natural justice apply to the proceedings of that meeting.”

Justice Needham then looked at a number of cases on the issue of legal representation and found that a person is not entitled as of right to be legally represented before the board of the club. The court did say that there may be occasions when a person has a right of legal representation but it would depend on the circumstances. If you are in any doubt, the club needs to seek legal advice on the point.

This case has been followed or cited with approval in a number of later cases including Thompson v Earlwood-Bardwell Park RSL Club Limited (1999) NSWSC 243 (a case involving a member of a registered/licensed club) and Cains v Jenkins (1979) 28 ALR, which was a case involving a trade union committee hearing of charges against the union secretary.

Even though there is no general right at law for a member to insist on legal representation at a disciplinary hearing/meeting, clubs should check with the club’s solicitor just to make sure that the board’s current disciplinary practices comply with its obligations under the club’s constitution and there are no unusual circumstances that may mean that a board should consider allowing a member to have their solicitor at the meeting.

Click on the image below to see the article as it appeared in Club Life May 2015. 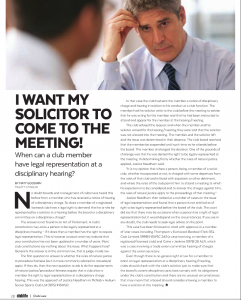