How can a club protect itself from a builder’s delay?

This article appeared in the April 2016 issue of Club Life.

It’s a common scenario: the Board and management identify a need to renovate or improve the club premises, contracts are signed and building work commences well in time for Christmas functions. But how can the club best protect itself from a delay?

A number of industry standard building contracts allow for the owner to claim “liquidated damages” against the builder in certain circumstances. If you are negotiating a building or works contract on the club’s behalf, it is vital to have at least a basic knowledge of the purpose behind liquidated damages, the issues concerning them and how they can help protect your club.

What are liquidated damages?

Liquidated damages are an amount or amounts that parties to a contract agree that one party will pay to the other if the first party breaches the contract. Liquidated damages must be an agreed genuine pre-estimate of the daily loss the club will suffer if building works are not completed by the due date.

Without a liquidated damages clause, the party not in breach (the “innocent party”) must sue for breach of contract and prove loss or damage if the other party has breached the contract. This may require evidence from accountants and other experts to prove what actual loss or damage the club has suffered (if any).

What are the pitfalls to liquidated damages clauses?

In certain circumstances, a liquidated damages clause can be considered a “penalty”. A penalty is an attempt to force one party to the contract to pay money if that party breaches the contract, without regard to the nature of the breach or the actual damage the innocent party suffers.

Penalties are unenforceable at law, so it pays to know when a court might consider a liquidated damages clause to be a penalty.

One of the indicators of a penalty is that the amount payable under the purported liquidated damages clause is “extravagant”, or out of all proportion to the actual amount of damage that the innocent party might expect to suffer in the case of a breach.

Some industry standard building contracts include provision for the club to be able to claim liquidated damages if the builder fails to complete the works on time.

These contracts usually contain a schedule that allows the club to insert an amount for liquidated damages that the builder must pay to the club for every day that completion of the works is delayed.

Having regard to the risk of a liquidated damages clause being construed as a penalty (and therefore void), it is critical that the club put some thought into what it genuinely thinks its damages would be if completion of the works were delayed, and use that to determine the amount of daily liquidated damages to be inserted into the schedule of the building contract.

Getting early advice on your building contract and negotiating your club’s needs upfront can help avoid the risk of unnecessary delays and disputes and ultimately have your renovations ready for the Christmas trade.

Click on the image below to see the article as it appeared in Club Life April 2016. 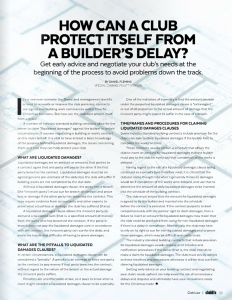