In last month’s column we discussed some of the issues that arose out of the recent round of Club Director Institute seminars on Growth through Amalgamations and Mergers held at various venues around NSW.

We discussed the requirement under clause 7 of the Registered Club Regulation (Regulation) that clubs  proposing to amalgamate must enter into a MoU in respect of the amalgamation. This is a mandatory requirement. The Independent Liquor and Gaming Authority will not approve an amalgamation or the transfer of the club liquor licence under section 60 of the Liquor Act unless the clubs have entered into an MoU and a signed and dated copy of it has been lodged with the Application.

We discussed that the Regulation requires the MoU to deal with (or include) the following:

The manner in which the premises and other facilities of the dissolved club will be managed and the degree of autonomy that will be permitted in the management of those premises and facilities.

A list of the traditions, amenities and community support that will be preserved or continued by the amalgamated club:

We also talked about how the MoU provisions in the Regulation do not contemplate or address the commercial aspects of an amalgamation.

We also discussed how important it was, as is the case with any legally binding commercial document, to make sure that the MoU clearly sets out each club’s rights and obligations in a clear and precise way and that each club fully understands the terms and the meaning of the MoU.

The law of contracts generally provides that if the words in a contract are clear and unambiguous then the words mean what they say even if the result is a bad deal for one of the parties –this is particularly so in the case where 2 commercial entities (such as clubs) are parties to the contract. It is only if the words are ambiguous that the court is able to look at the parties’ intention and at the background to the deal, which may shed more light on what the parties actually meant.

To avoid potentially costly confusion, it is very important that each club engage solicitors familiar with the club amalgamation process to prepare the MoU in order to make sure that it accurately reflects what the clubs have both discussed and agreed upon as the basis for the amalgamation.

I will write about some of the other issues discussed at the seminars in future columns.

Click on the image below to see the article as it appeared in Club Life October 2015. 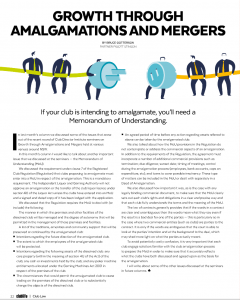