One question that is often asked during the amalgamation process is: What part do the members play? In our experience, getting members on board is one of the key factors to a successful amalgamation.

After the terms of the Memorandum of Understanding (MoU) have been agreed, the next step is for the members of both clubs to approve “in principle” an amalgamation. This is required under Section 17AEB(d) of the Registered Clubs Act (RCA). Under this provision,

the Independent Liquor and Gaming Authority is only able to approve the transfer of a club licence (and therefore an amalgamation) if it is satisfied that the “ordinary members” of both clubs have approved the amalgamation at separate meetings of each club.

Which Members Can Vote on the Amalgamation?

This issue can sometimes leave club directors scratching their heads. This is because of the definition of the term “ordinary member” and the interplay between the RCA and a club’s constitution.

Section 17AEB(d) requires evidence of the approval of the “ordinary members” of each club who are defined in the RCA as being, in effect, any person who has been elected to membership of a club by the governing body of that club. Consequently honorary, temporary and provisional members are excluded from voting.

The wide definition of “ordinary members” includes members who may not have voting rights under a club’s constitution. For example, some club’s social members may be precluded from voting on any matter or may only vote in an election of the board. However, for the purposes of the RCA, such “non-voting” members are “ordinary members” and are entitled to receive notice of the meeting and attend and vote on the amalgamation proposal for the purpose of section 17AEB(d).

So if your club’s constitution provides that only certain categories of membership can attend and vote at general meetings, then the RCA will override the club’s constitution when it comes to who can vote on approval of an amalgamation. The resolution of the ordinary members to approve the amalgamation in principle requires a simple majority (ie, 50 per cent plus 1) to be passed.

However, it is important to remember that in addition to the obligation for members to approve an amalgamation under section 17AEB(d), your club may need to hold another vote as required by your club’s constitution.

If any of these votes are unsuccessful, the amalgamation cannot be approved at this stage.

It also important to remember that under the RCA, employees who are members of the club cannot vote and that proxy voting is prohibited.

Notice to Members required by the RCA

displayed on the noticeboard of the club’s premises and

neither the RCA, the Regulation or the Office of Liquor and Gaming (OLGR) specify the form that the notice should take or when or for how long the notice must be displayed.

As the members’ approval must be given at a general meeting, the provisions of the Corporations Act and case law regarding the adequacy of notice of a meeting need to be followed. This means that notice of 21 days of each meeting, the proposed resolution(s) and sufficient details of the amalgamation will need to be sent to members.

While not required by the RCA or the Regulations, we often recommend that the club conduct an information session (or sessions) to consult with members and answer any questions that arise. These sessions can be a valuable opportunity to clear up confusion, allay members concerns and explain the board’s reasons for wanting to amalgamate. Dealing with these concerns prior to the general meeting to approve the amalgamation can minimise a potential “no” vote for members who do not understand the process of, or need for, an amalgamation.

Click on the image below to see the article as it appeared in Club Life November 2015. 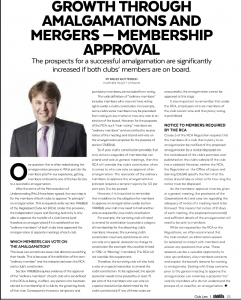