The following article appeared in the August 2015 issue of Club Life.

Marketing and social media is important to every business and clubs are no exception. More and more clubs are realising that if they want to stay connected with their members they need to take advantage of every possible opportunity including emails, text messages and social media such as Facebook, Twitter and Instagram.

But what about a club’s gaming machines? Gaming machines can be a significant source of revenue and many clubs invest heavily in machines to ensure they aren’t left behind. So how does a club tell its members and the world that it has the latest and greatest gaming machines? As most clubs are aware, section 43(1) of the Gaming Machines Act 2001 (the Gaming Act) provides the broad prohibition that:

“A person… (including a club)… must not publish or cause to be published any gaming machine advertising.”

The definition of “gaming machine advertising” is very broad but allows for a number of limited exceptions, which are provided under the Gaming Machine Regulations 2010 (the Regulations). Clubs considering promoting their gaming machines to members need to carefully review the allowed exceptions.

Under Regulation 46(4) a club is allowed (in certain circumstances) to send promotional material that includes “gaming machine advertising” to members who have given their express consent. However, before your club starts emailing and texting members you should seek advice to ensure your messages comply with the exemption.

On a practical note, sending marketing material by email or text message to members increases the likelihood of questions being raised by members regarding your club’s compliance with the Privacy Act 1988 (the Privacy Act). A quick hint – if your club’s privacy policy mentions “National Privacy Principles” or doesn’t refer to overseas disclosure, then it’s time to review your privacy policy.

Messages sent from the club to members are direct marketing for the purposes of the Privacy Act and while there is an overlap with the Gaming Act, clubs need to ensure their practices, including the sending of messages, also comply with the Privacy Act. You also need to make sure you get informed consent from members when they complete their membership application form (or renewal).

Okay, so provided your club complies with the Gaming Act and the Privacy Act, what about social media? Or more specifically what if a member posts the following statement on the club’s Facebook page: “Won it big at (insert your club’s name here) on the pokies, the RSL has the best pokies ever!”?

The Australian Advertising Standards Bureau (ASB) has previously ruled that “the Facebook site of an advertiser is a marketing communication tool over which the advertiser has a reasonable degree of control” and that therefore the relevant advertising code was applicable to posts made by the company. Furthermore, the ASB held that the “(the relevant advertising) Code applie(d) to the Content generated by the page creator as well as material or comments posted by users or friends”.

The lesson for clubs is that while it is vital to take advantage of marketing and social media to communicate with members, clubs must do so within the bounds of liquor, gaming and privacy laws and regulations.

Click on the image below to see the article as in appeared in Club Life August 2015. 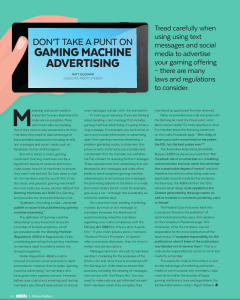